Not long ago I was sailing off the coast of Thailand on a 60-foot catamaran and I was thinking about the dives we expected to do around the Phi Phi Islands. We had sailed out of Phuket and the Andaman sea was a beautiful emerald green. We were making about 7 knots in relatively light winds with seas of about a foot. Pretty regularly we would be passed by a long tail skiff that would pass us like we were standing still.

In Thailand, there are a super abundance of “long tails”.  Long tails around Phuket look like someone took the engine out a Chevy, put a long transmission on the engine, and then fastened a propeller on the other end of the transmission.

Often times the transmissions were 6 to 8 feet long, so at least in theory, long tails can travel through some pretty shallow water because the propeller is so far away from the hull, but can also cut through some pretty large waves. (What we noticed is the farther away we got from Phuket the engines on the long tails seemed to get smaller.

By the time we a couple hundred miles away from Phuket the engines that were being used were the size of lawnmower engines which the locals revved up to high-speed whine). 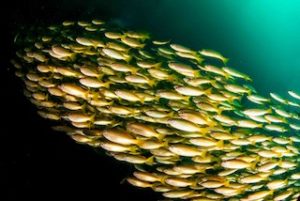 Somewhat absent-mindedly, I asked the captain if long tails had created any problems for divers. He said: “I’m glad you asked. Last week a Japanese diver got cut in half by a long tail’s propeller so you need to really be careful when you are in the water.” Well, that got my attention.

On our boat, we had 10 divers, two divemasters, an instructor, one diver who was a rescue diver with the rest of the divers being relatively new divers. Arrangements had been made so we would have a local shop send out a divemaster to lead the dives because none of us had seen the dive sites.

Early on in the trip, we anchored off a small limestone island about 1/2 way to the Phi Phi islands. It had been a warm day, so we were ready to get off the boat and do some snorkeling around the boat to cool off. The first mate had barely set the anchor and the stern safety line was cast off when I noticed the stern line was snaking away from the boat pretty quickly.

The captain was making his way back to the stern when one our group jumped in to snorkel — too soon, the Captain had not announced the “pool” was open. What happened next is illustrative of how big the currents can be in Thailand. By the time our erstwhile snorkeler had resurfaced after jumping in the water, he was over 50 feet from the boat, and past the end of the safety line. The captain had a few choice words, but the loose translation for everyone else on the boat was, stay on board, I’ll go get that fool in the dingy and then we will reposition the boat. 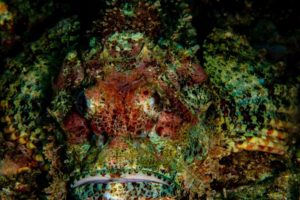 It didn’t take long for the captain to retrieve our snorkeler. But it was a good lesson in how big the currents in Thailand can be. To give you a comparison in Cozumel, which is a world-class drift diving capital with relatively predictable currents, they often shut down diving when there are storms that push the currents up over 3 knots.

My estimate of the speed of the current we first ran into in Thailand was around 5 knots.

After the captain repositioned the boat, we had a little discussion on why no one should get in the “pool” until the captain announced the “pool” was open.

The next day we sailed to the first dive site. Our local guide came on board and briefed the dive. He wanted us to go no deeper than 70 feet and to stay close together and we would navigate around a large granite boulder that gave the site its name: “the shark fin”. Visibility was maybe 40 feet which meant there was an enormous amount of food in the water for the fish and critters on the site. 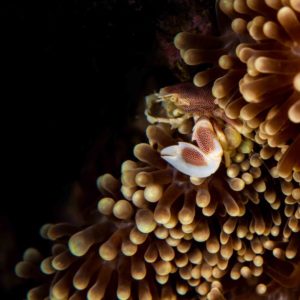 Of the 10 divers, five carried cameras ranging from point and shoots up to the beast that I carry, which is a DSLR with two strobes and focus light. I took a few shots but was keeping my eye on the newest photographer and a couple of the other divers when our guide motioned to me that he was going back to speed up the stragglers.

We were maybe 20 minutes into the dive.  Our guide pointed to the wall in front of us and gestured to me to follow the wall around, but wait where the wall petered out.  So I started to follow the wall for maybe 50 yards when I noticed that there seemed to be quite a bit of sand cascading down the wall next to me.

There also seemed to be quite a few fish swimming down the wall instead of across the wall. I gestured to the divers behind me to stop and I would check out the conditions. I changed the camera to my left hand and stretched my right hand out into what I suspected was a downdraft current next to the wall.

Wow, there was a lot of cold water rushing by my hand. I kicked a bit closer to the wall and decided it was a bad idea to go any further into what seemed to be a downdraft current. I turned around and motioned to the divers we were going to go back the way we came.

After a few moments, we found our dive guide who was still trying to speed up the stragglers.  He looked at me and shook his head, and gave the signal to turn around and go back the way we had just left. I shook my head and signaled no.

He looked at me like I had lost my mind, and gestured along the lines of, let me show you as he swam back towards the wall. 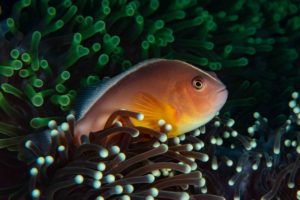 Our guide got caught in the downdraft and then proceeded to fight to swim out of it.  He was at about 100 feet deep when he finally got out of the downdraft. He swam back to where we were and we swam the rest of the way back the way we came and did so uneventfully.

On the surface, he asked me how I figured it was such a bad downdraft. I told him that I had once before seen a downdraft in Cozumel and I had had to swim hard to escape it.

So I always watch for sand falls and anything that looks unusual like schools of fish swimming down a wall towards the bottom. I told him the fact that our group was not sticking together made it tough to focus on all of the conditions. I told him I would fuss at the group when we got back on the boat, but he should probably hit that point again pretty hard in the morning briefing the next day.

Believe me, he did.

The rest of the trip we did a bit better as a group of staying together.  I got some snaps and life was good.

We didn’t come across any more downdrafts for the rest of the trip. We did a little better staying together as a group, but it still left me thinking, wow, even with local knowledge and a fair amount of experience, it’s easy to miss something that could be a pretty serious risk.

Better make sure the group is really committed to working together as a team as opposed to acting like a bunch of individuals just out sightseeing topside.

I’ve been diving for over 15 years and as a Naui Instructor, my passion is to help divers become better underwater photographers and videographers.  Little know fact; I shoot stock for Adobe and for Shutterstock stock agencies.  Stock agencies set exacting standards for composition, technical precision and salability of images and I’m proud to have sold over 10, 000 images worldwide through relationships with stock agencies.  I have also developed a course to help divers develop the skills necessary to be successful underwater photographers and videographers and do so in an environmentally friendly manner.  The majority of my blog articles focus on underwater photography and my travels to other parts of the world. Please visit: www. mydivetravels.com to enjoy many of my other articles.