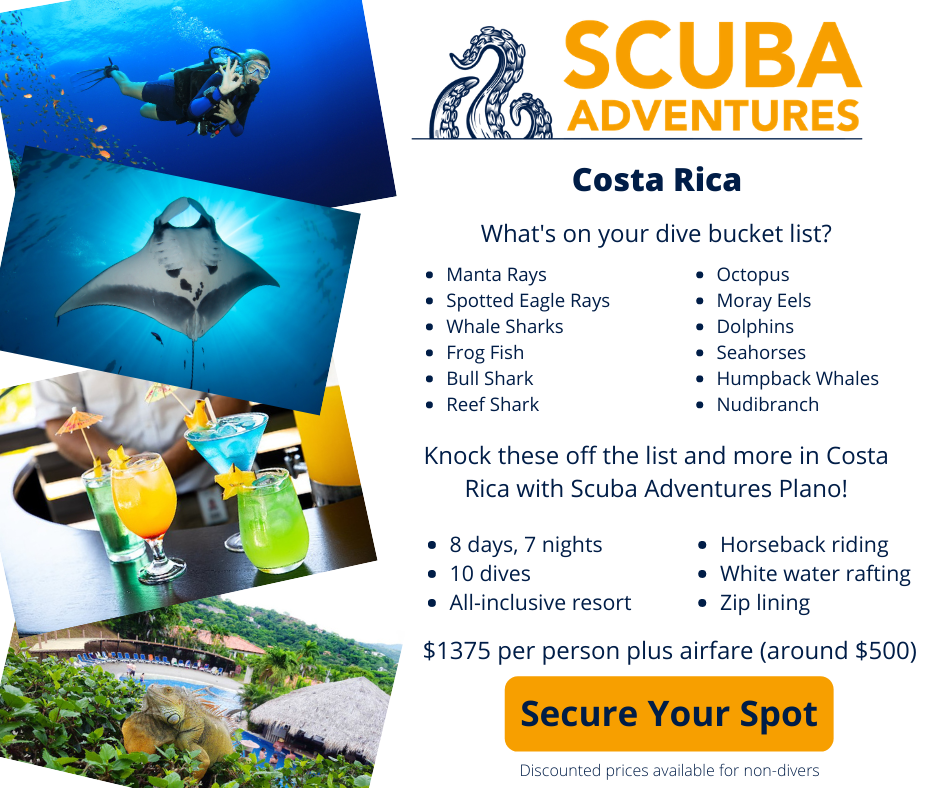 You can have the chance to knock these bucket-list items off your list and more in Costa Rica this summer with Scuba Adventures Plano.

Join us for 8 days and 7 nights in Costa Rica. You get 10 dives, all meals at the all-inclusive resort and airport transfers

If your friend or partner isn’t a scuba diver but still wants to enjoy everything Costa Rica and the amazing Villas Sol Hotel & Beach Resort has to offer, they can join us for only $900!

Although we think that sharing a room with fellow scuba fanatics is all a part of the fun, you can book a single room for $1659 (subject to availability).

Ready to start your scuba adventure?

Costa Rica is becoming one of the most popular scuba diving sites for divers in the United States. Sandwiched between two oceans, Costa Rica offers diverse marine life not available in many countries.

From this biggest sharks and rays in the world to amazing macro life, Costa Rica has it all. Here are some of the exciting things you could see on one of your dives:

Whale Sharks- If you’re going on your trip to Costa Rica with Scuba Adventures Plano, you’re in luck! Whale Sharks visit Costa Rica from June-September. Keep your eyes peeled when you’re at around 25-35 feet for these gentle giants.

Giant Pacific Manta Ray- Manta Rays can be anywhere from 14-24 feet long! They can be found year-round in the fabulous Costa Rica waters. Their large mouths help them gather thousands of plankton in one gulp.

White Tipped Reef Shark- These non-aggressive sharks are similar to some humans in that they enjoy a late-night snack. They do most of their hunting at night and during the day you can find them resting in the sand.

Hawskbill and Loggerhead Turtles- Anyone else adore turtles? If you’re like me, you’ll love our trip to Costa Rica where turtles are found year-round!

Octopus- There are several species of octopus in Costa Rica. If you’re hoping to find one, look into the cracks and crevices of the coral. They are camouflage queens and can easily sneak up on their prey.

Spotted Eagle Ray- These interesting rays can be found shoveling in the sand with their pointy noses looking for shellfish. If you’re lucky you’ll see a squadron of 15 to 20!

Moray Eel- You can find up to 16 different species of Moray Eels in Costa Rica! Do you think you can find them all? Just be sure to keep your fingers to yourself, they have a bit of a bite!

Dolphins- During your surface interval you might find a pod of 20-25 leaping around the boat!

Humpback Whales- Humpback whales are more common in Costa Rica During the wintertime. Looks like we might have to go back!

Frog Fish- Does anyone have a dive buddy that can always seem to find crazy creatures hiding in the coral? If so, you should definitely bring them along to Costa Rica to find the Frog Fish! They blend in incredibly well with their surroundings.

Bull Shark- Bull Sharks can be found year-round in Costa Rica but they are especially present from May to November due to the nutrient swells.

Orcas- What doesn’t Costa Rica have?? In the wintertime, you might stumble across a Killer Whale, or Orca.

Hammerheads- Hammerheads are one of the few sharks that travel in schools, and let me tell you, it is quite a sight! You can find them at Cocos Island in Costa Rica and even sometimes on shore dives.

Nudibranch- If you’ve never heard of Nudibranchs, you are missing out! They are a macro photographer’s dream come true. You can find many different species of these sea slugs hiding in the colorful coral.

Scuba diving is fantastic in Costa Rica year-round! May to November is considered the rainy season, but don’t be afraid! That usually just means you’ll get a few hours of rain in the afternoon (during your surface interval) and then it clears up again.

If you’re a fair-weather diver (no judgment!) then have no fear! Water temperatures are on average 83 or 84ºF in the summer.

Visibility can range anywhere from 15 feet to 100 feet! Either way, there is always an abundance of marine life to enjoy.

In summer, the ocean surface is predominately calmer than in the winter months. Most dive sites are calm with little to no currents or surge except for Cocos islands. Cocos islands can have stronger currents and surge.

Make Your Dream A Reality:
Book A Trip To Costa Rica Today

Start Your Next Adventure Today!

Google
I can’t recommend this place enough. After moving to the area, I read a lot of reviews and emailed several dive shops before going with Scuba Adventures. I choose them because they were the most responsive and helpful. The owners seem to not only be great divers but have business backgrounds. This is the most focus on customer service I have seen in a dive shop. Good inventory with all of the brands I could ask for. On point with their pricing. If you do find a better price they will work with you.

I ended up taking the Rescue Diver course and had a blast! I just got back from a dive trip with them at Lake Travis, very enjoyable. They also have one of the only indoor pools (18 ft.) in the area.

At Scuba ranch they have a big spot that is one of the easiest to get to and a nice pavilion for training. They are right next to the air refill station, which I love! Family and friends are welcome at the ranch. Good community there on weekends and you'll most likely find a dive buddy for a fun dive.

Google
Scuba Adventures and their staff are beyond amazing! Their Plano store has a very wide selection of equipment and the pool is 18ft deep! Their Scuba Ranch location is amazing and still growing, with plenty of room and seating. I’m a fairly new diver and all the instructors do an amazing job of making me feel safe and secure deep underwater. Their staff is always very helpful and I can’t wait to continue my diving knowledge and certificates with them.

Google
Found a great diving shop for all my gear. Been living here in texas for awhile and this shop has just what I needed. Really recommend scuba adventure for all your gear.

Google
Went in last week to pick out goggles for an upcoming trip— loved the selection of masks they had available! Ended up picking out a hot pink pair to shamelessly match the other accessories I’d picked out.

Google
The new owners are the greatest! Their positive approach towards people and the sport of diving are huge part of the reason I love the sport. When they told me they were going to open a dive shop; I knew without a doubt I was going to be their customer. I have taken several dive adventures with them and other scuba diving misfits, and plan on taking many more.

Google
Decided to revisit this shop since it is under new management. Already impressed with the facility improvements - by far the best training pool I have seen. Looking forward to the roll out of the full training curriculum - will be able to go from open water certified through all kinds of technical specialties. Good dive gear selection. Owners really have a great vision for promoting scuba diving and ocean adventures.

Google
This is the shop with the most experienced and competent personnel in the metroplex. Their commitment to safe, enjoyable and professional instruction is obvious from the first time you enter the store and meet the staff and owners. I have dove with most of them over the years and know first hand the love of diving they have and now share with the community as the new team. They are knowledgeable and up to date with the latest dive info. Don't miss a chance to dive with them.

Google
In January 2020, Scuba Adventures was purchased by divers that were affiliated with a different scuba store. These same divers taught me to dive, and got me to fall in love with scuba diving (despite me being pretty scared to start). I trust them, enough that I opted to take a trip with them to Cozumel for diving in 2019. It was one of the best trips of my life, and now I'm already signed up for their Costa Rica dive trip in 2020 with Scuba Adventures. I haven't visited the shop yet, but I can 100% vouch for the new owners--they are knowledgeable divers, good people, and all around amazing.

Google
Owners and staff are professional, knowledgeable, and friendly. Allowed me to try backplate and wing set up in the pool. They did not pressure me to buy anything, but gave great information on products and financing options. All in all great staff and would recommend them to anyone!!!

Google
Great customer service, from the owners to the employees. Very knowledgeable about everything and anything pertaining to scuba diving. The instructors are highly educated and experienced in scuba diving. They put you through real life scenarios, so you know and understand what to do in the event something happens while you are under water. My family and I learned a lot about scuba diving in a very short amount of time. We will definitely keep taking additional courses with Scuba Adventures as we progress. We definitely reccomend Scuba Adventures to anyone wanting to learn and get scuba diving certified.
Read more...
5
Excellent